Our Welsh herd is made up of A, B, C, and D types, and we love them all. They are fun, spirited ponies and horses, and we enjoy our time spent with them. They may be used for American Sport Pony, American Walking Pony, and American Gaited Pony breeding. However, crosses between Section Bs and Section C/Ds are frowned upon - I will not allow them. Crosses between Section As and Bs are allowed - the resulting foal would be a Section B. Crossing Sec As with Sec. C/Ds would likely produce a Section C foal. Enjoy looking around at our Welsh herd. 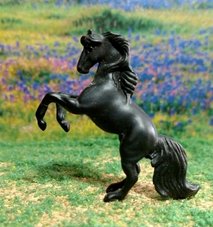 Aberdare Dixie Gold (Aberdare Colvin x Open Gates Whistling Dixie). 1992 black Section B Welsh Pony stallion. Dix is a great pony. He's spunky, though he's slowing down a bit now and enjoying a quiet life. He's one of our favorite ponies here on the farm. He shows in IMEHA, and was bred by Cindi Nakagawa/Aberdare Welsh Ponies & Cobs (a division of Indigo Creek Stables). Dix is an OF Breyer Mini Whinny Rearing Andalusian. 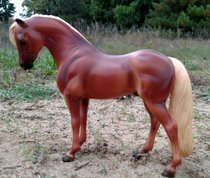 Brecon's Diamond Jester (Blue Sky’s Jester x Brecon Diamond). 2000 chestnut Section A Welsh Pony stallion. Jester is a very nice pony. He's friendly and willing, and a pleasure to work with. He shows in IMEHA, and he was bred by Kay Myers/Caballos del Mar. Jester is an OF Breyer Traditional Cefnoakpark Bouncer LE "Apple Jack." 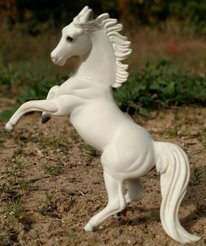 Brecon's Honorable Eclipse (Revel Honor x Brecon Eclipse). 1998 light grey Section A Welsh Pony stallion. Eclipse is a spitfire to handle, with that typical pony attitude, but we love him for it. He loves to race around his pasture and show off. Eclipse is a half-brother to our Section C mare, Glyn Du's Bedazzled [through sire]. He shows in IMEHA, and he was bred by Kay Myers/Caballos del Mar. Eclipse is an OF Breyer SM G2 Arabian. 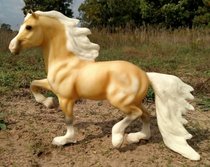 Chysgoda Sun Commander (Aberdare Bledri x Serenade Magic). 2002 palomino Section D Welsh Cob stallion. Commander is our foundation Section D, and he's big and bold and beautiful! He loves people, and he is always at the gate to greet everyone. He has great knee action at the trot, and we couldn't be happier with him. He shows in IMEHA, and he was bred by Tracey Bartone/Shadow Wolf Ranch. Commander is an OF Breyer Traditional Welsh Cob LE "Sunny Boy" [with the bi-colored eyes].

Fun fact: I got this gorgeous boy from a seller at the swap meet at the Holiday Inn hotel during the 2010  BreyerFest. There were two Sunny Boys on her shelf, and my younger sister noticed this one had those cool bi-colored eyes. So of course, he's the one I chose :-) 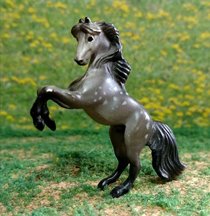 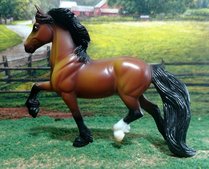 Trumpet's Shamrock Star (A Star By Far x Emily). 2006 bay Section D Welsh Cob stallion. Shamrock is a happy fellow. He's spirited and showy, and he likes to trot around his pasture and investigate things. He shows in IMEHA, and he was bred by Mary Vinyard/Rocking M Ranch. Shamrock is an OF Breyer SM G3 Cob 2009 JCP SR. 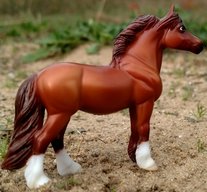 Aberdare Catching Fire (Nighthenge Edmyg x Llyndruth Spellcaster). 1999 chestnut Section C Welsh Cob mare. Fire is one of our foundation Welsh mares, and her coat is as fiery as her name. Fortunately, her temperament is more laid back. She's easy to handle and work with. She shows in IMEHA, and she was bred by Cindi Nakagawa/Aberdare Welsh Ponies & Cobs [a division of Indigo Creek Stables]. Fire is an OF Breyer SM G3 Pony 2009 JCP SR. 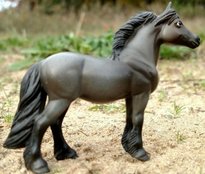 Glyn Du's Bedazzled (Revel Honor x Arddyn Bewitched). 1998 black roan Section C Welsh Cob mare. Bedazzled is a terrific little mare. She's friendly and easy to handle, and she's playful. That also means she can be a bit naughty, too. She's a half-sister to our grey Section A stallion, Brecon's Honorable Eclipse [through sire] and a half-sister to our dapple grey Section D mare, Trumpet's Dazzler [through dam]. Bedazzled shows in IMEHA, and she was bred by Kay Myers/Caballos del Mar. She is an OF Breyer SM G3 Pony. 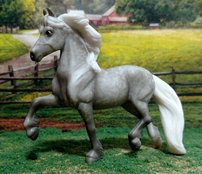 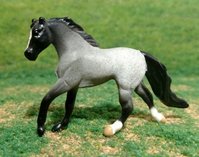 Trumpet's Frostbite (Peyote Piper x Windmere Cariad).1995 black roan Section B Welsh Pony mare. Frostbite is a great show pony, and a really  nice pony overall. We enjoy her personality - she loves people and being around them, especially kids. She shows in IMEHA, and she was bred by Heather Mays/Green Mountain Stables. Frostbite is an OF Breyer Mini Whinny Cantering TB Mare. 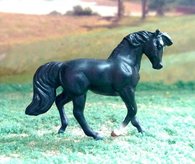 Trumpet's Night Star (Rising Star x Glyndahl Du Nos). 1999 black Section B Welsh Pony mare. Star is a fun pony. She's fun to ride, has plenty of spirit, and she's nosy. She loves to stop along the trail and sniff things - even other critters! She shows in IMEHA, and she was bred by Cory Hartung/Double Hart Ranch. Star is an OF Breyer Mini Whinny Cantering Morgan Mare.