Our Morgans are bred to be not only pretty faces for the show ring, but athletic and able to perform any task you ask of them. 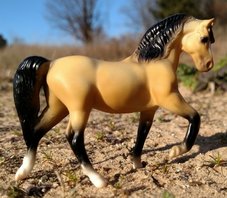 CDM Revered (Regency Claim Jumper *R x CDM Beloved). 2005 buckskin Morgan stallion. Revere is one of our newer Morgan stallions, and he's a great addition to the herd. He's a gentleman, calm, and loves trail riding. He currently shows in both IMEHA and IPABRA. His breeding was arranged by Kay Myers/Caballos del Mar and us, and Revere is an OF Breyer SM G1 Morgan Stallion. 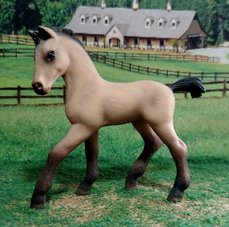 DHR Gold Beam (Riverview Zodiac x DHR Opal). 1993 buckskin Morgan stallion (shown as foal). Beamer is one of our foundation stallions for our Morgan herd, and he's a sweetheart, but there's always a little gleam in his eyes! He loves a good fast gallop around the property, and he's always happy to greet people. He currently shows in IMEHA, where he's a Division Grand and Reserve Grand Champion. Bred by Cory Hartung/Double Hart Ranch, Beamer is an OF Schleich Andalusian Foal. 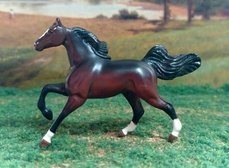 DHR Malevolent (DHR Tempestuous x DHR Empress). 1997 bay Morgan stallion. Malevolent is also one of our foundation sires for our Morgan herd, and he's the kind of horse you just love to be around. He's a charmer - he knows how to get a treat or a rub on the neck from anyone. He currently shows in IMEHA, where he's a Division Grand and Reserve Grand Champion. Bred by Cory Hartung/Double Hart Ranch, Malevolent is an OF Breyer Mini Whinny Running TWH. 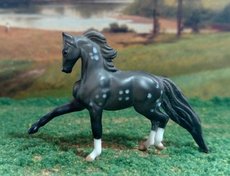 REM Boston Silver (Boston Hoodoo REM x RVF Silver Rose). 1994 dapple grey Morgan stallion. Boston was our first Morgan stallion in the herd, and we so enjoy having him. Anyone can ride him - he especially likes kids, and always go so gentle with them. He currently shows in IMEHA, where he has done very well. Bred by Cindi Nakagawa/River's Edge Morgans, Boston is an OF Breyer Mini Whinny Trotting Morgan. 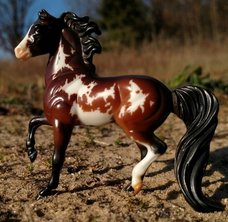 TFM Industrial Lights Magic (Stand and Deliver *R x Skys Blu *R). 2008 bay frame overo Morgan stallion. Indy is our newest addition to our Morgan stallion herd, and he's got a lot of sparkling chrome to offer, along with a playful attitude. Don't let his coloring throw you - this boy is all Morgan. He currently shows in IMEHA and IPABRA. His breeding was arranged by us, and Indy is an OF Breyer SM G2 Morgan, JAH SR Mini Connoisseur "Mosaic." 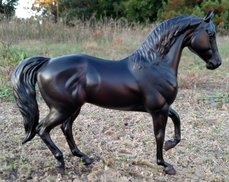 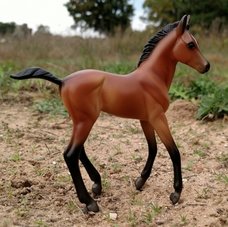 CDM Debutante (HVK Aristocrat x CDM Marvelous++). 2012 light bay Morgan mare. Debutante is one our younger Morgan mares, and a sweetheart. She's got plenty of spirit, but she's always willing to please. She's currently showing in IMEHA and IPABRA. Bred by Kay Myers/Caballos del Mar, she is an OF Breyer Classics Morgan Foal. 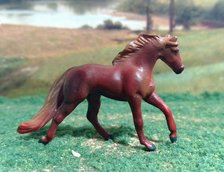 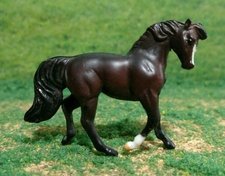 CDM Wonder Luck (CDM Wish Me Luck x CDM Wonder). 2001 dark bay Morgan mare. Wonder is also one of our foundation mares for our Morgan herd, and we're lucky to have her. She's a great show horse; she's an IMEHA Champion, and well on her way to her next title. She's intelligent, gentle, and beautiful - everything you'd want in a horse. Bred by Kay Myers/Caballos del Mar, Wonder is an OF Breyer Mini Whinny Morgan Mare. 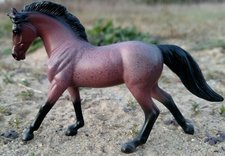 DHR Moon Rose (DHR Moonlight x Black Roses). 1998 bay roan Morgan mare. Looking for a sparkly, unique coat and plenty of charisma? Rose is your mare. Another of our foundation mares, she's a fun horse to ride - she can get up and go! Bred by Cory Hartung/Double Hart Ranch and Jennifer Lambert, Rose is an OF Breyer SM G3 WB. 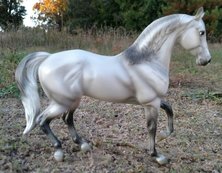 Foxfire Silver 'N Gold (Foxfire Silver Eclipse x Foxfire Goldenrod). 2007 light grey Morgan mare. Silver is a really nice mare. She's always ready to go for a ride, and she likes hanging in the corral by the barn with the other mares.  She's currently showing in IMEHA, where she is a Division Grand Champion, and IPABRA. Bred by Delana Metcalf/Foxfire Farm, Silver is an OF Breyer Classics Mariah. 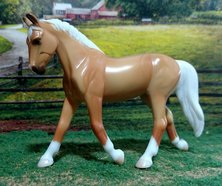 REM Serenity (RVF Gold Aran x REM Aphrodite). 2003 palomino Morgan mare. Serenity is one our older mares, and she has the older-school build - a bit heftier, but no less athletic or quick. She's a super easy horse to get along with - you won't find a nicer mare anywhere. Bred by Cindi Nakagawa/River's Edge Morgans, Serenity is an OF Breyer SM G4 Driving Horse, 2010 WEG SR (part of set sold at WEG). 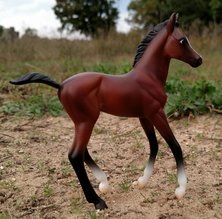 TFM Coquette (Brookridge Player x Lippitts Fox). 2000 dark bay Morgan mare. Coquette is also one of our older mares, and she's one of our favorite horses to take on a trail ride. She's got a lot of spunk, but she's also happy to mosey on down the trail at a walk. She's currently showing in IMEHA and IPABRA. Bred by Heather Mays/Green Mountain Stables, Coquette is an OF Breyer Classics Morgan Foal.