Our American Sport Horse herd is bred for performance, whether it's jumping, cross-country, hunting, or dressage - or even just trail riding. They can be crossed on our other horses to produce just the right sport horse for you. Most of our Sport Horses (and Sport Ponies) are named after super heroes and villains; we would appreciate it if you continued this trend, but it's not a requirement. 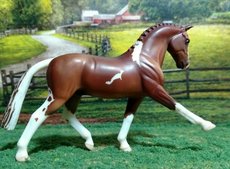 Challenger (Trumpeteer x Javelin). 2006 chestnut minimal tobiano American Sport Horse stallion [ASH/Trakehner]. A homebred, Challenger has the moxie to do anything you ask of him. He's intelligent, quick, and has a willing nature to try anything. Challenger is a half-brother to Firebrand [through sire]. He's currently showing in IMEHA. Challenger is a CM etched Breyer SM G4 Dressage Horse [by Jennifer Tomey]. 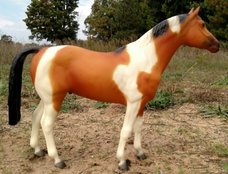 Firebrand (Trumpeteer x Flamebird). 2007 light bay tobiano American Sport Horse stallion [ASH/TB]. Firebrand is a homebred, and half-brother to Challenger [through sire]. He is a big boy, and has a big stride that can carry you confidently between fences or across a dressage arena. He's quiet and easy to handle, and currently shows in IMEHA and IPABRA. Firebrand is an OF Breyer Traditional Trakehner "Kaleidoscope." 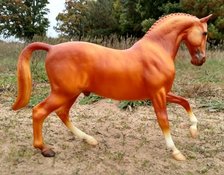 Polaris (For Honor x Island Beacon). 2006 chestnut American Sport Horse stallion [Trakehner/TB]. Polaris is a homebred, and he's a super nice horse. He's athletic with plenty of power, but easy to ride and willing to please. Named for a Marvel Comics super hero, he currently shows in IMEHA. Polaris is an OF Breyer Traditional Roemer. 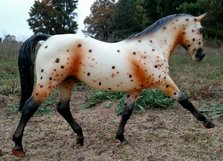 Thunderstrike (War Hammer x Thunder Bey Diva). 2005 bay semi-leopard American Sport Horse stallion [Knabstrupper/Appaloosa]. He is a homebred, and his dam is half-Arabian. Named for a Marvel Comics super hero, he's a big powerful horse, and he likes learning new things. He can be a bit of a handful, but if he's working, he's all business. Thunderstrike is an OF Breyer Traditional Hanoverian "Pay N Go." 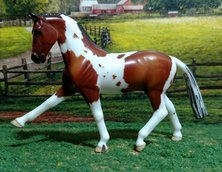 Trumpeteer (ThunderCat x Fiona). 2002 bay tobiano American Sport Horse stallion [TB/Oldenburg]. Trumpeteer is our foundation ASH stallion, and he's a great horse. He's very athletic and easy to work with, but he has plenty of spirit and isn't for beginning riders at all. Trumpeteer shows in IMEHA and was bred by Cory Hartung/Double Hart Ranch. He is a CM etched Breyer SM G4 Dressage Horse [by Jennifer Tomey]. 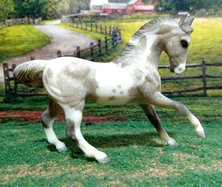 Winter Soldier (Sneeuwbal x Herzeenia). 2002 dapple grey (black) American Sport Horse stallion [Oldenburg/ASH]. Soldier is our other foundation stallion for our ASH herd, and he excels at pretty much everything we've done with him. He's compact and athletic, and all around a great horse to ride. Named for a Marvel Comics super hero, he currently shows in IMEHA. Bred by Cory Hartung/Double Hart Ranch, Soldier is a CM etched Breyer SM G2  WB [by Jennifer Tomey]. 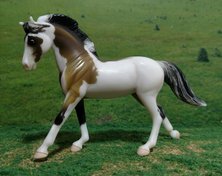 Psylocke (Hypnotic x Street Legal Silk). 2002 bay splash American Sport Horse mare [Trakehner/Paint]. Psylocke, named after one of our favorite Marvel super heroes, is our foundation mare for our ASH. She's very flashy, but there's plenty of substance under that chrome. This mare is a terrific jumper! A homebred, she shows in IMEHA. Psylocke is a CM etched Breyer SM G3 WB [by Jennifer Tomey].