Welcome to our Connemara herd. Though it's small, they are all quality ponies. We breed for a sturdy pony that can perform in any discipline you choose. Since the Connemara is an approved out-cross for Pony of the Americas, our Connemaras may be used for POA breeding, as well as Sport Pony crosses. 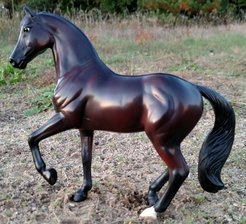 Cyclone's Cryptogram (Cooshen Chinook x Millfield’s Enigma). 2003 dark bay Connemara Pony stallion. Cyclone is a terrific horse - he's calm and focused, and a pleasure to ride and work with. He shows in IMEHA, and was bred by Kay Myers/Caballos del Mar. Cyclone is an OF Breyer Classic Warmblood Stallion. 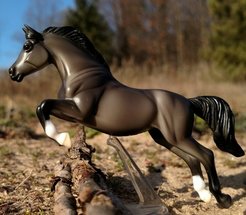 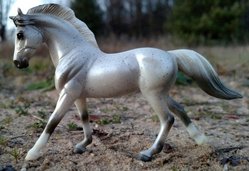 Capricorn TF (Virgo x Libra). 1997 flea-bitten grey Connemara Pony mare. Capricorn is a sweet, willing mare who always tries do whatever you ask of her. She currently shows in IMEHA, and she was bred by Cory Hartung/Double Hart Ranch. Capricorn is an OF Breyer SM G3 WB. 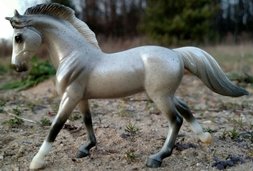 Trumpet's Park Belle (Boden Park Sheriff x Diamond Belle). 1999 flea-bitten grey Connemara Pony mare. Belle is a really nice mare, and gets along well with her look-a-like, Capricorn. She loves to jump and hang out in the corral where she can watch what's going on. Belle currently shows in IMEHA. She was bred by Kay Myers/Caballos del Mar, and she is an OF Breyer SM G3 WB.