On this page you will find our Knabstruppers, Irish Draughts, and one lone Irish Sport Horse. These are all small herds, for this reason we've grouped them together. They are available for American Sport Horse and Sport Pony crosses. 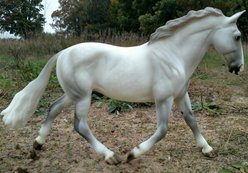 Stone Cold Irish (Glenlara Journey x Zorah). 2008 light grey Irish Draught stallion. Irish is our lone ID stallion, but what a handsome and nice fellow he is! He has shown at a couple live shows and won NAN cards, and he also shows well in IMEHA. He's sweet and gentle, and an all-around nice horse. Bred by Heather Mays/Green Mountain Stables, Irish is an OF Breyer Traditional O'Leary's Irish Diamond.


Fun fact: My sister and I got to meet the real O'Leary's Irish Diamond at BreyerFest 2010. 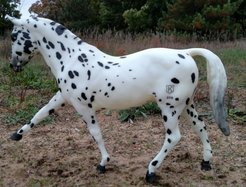 War Hammer (Adonis MK x Athena MK). 2000 black leopard Knabstrupper stallion. Hammer is our lone Knabstrupper stallion, but an excellent one. He loves attention, but he can be a handful to ride. He currently shows in IMEHA. Bred by Cory Hartung/Double Hart Ranch, Hammer is an OF Breyer Traditional Hanoverian. 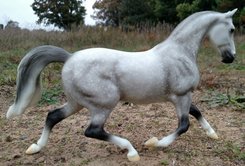 Blue Tara (Macha Blue x Flagmount Tara). 1999 dapple grey Irish Draught mare. Tara is one of just two ID mares we have here at the farm. She's a worker - she loves to go for a ride, and she's a serious horse. Even in the pasture, she's not very playful. Tara shows in IMEHA, and she was bred by Kay Myers/Caballos del Mar. She is an OF Breyer Traditional Misty's Twilight JCP SR. 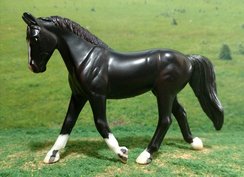 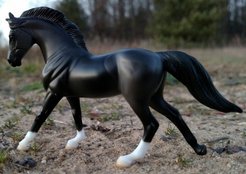 Midnight Justice (Admiral Justice x Midnight Emerald). 2008 black Irish Sport Horse mare [TB/ID]. Midnight is a very pretty, athletic mare, combining the best attributes of her sire and dam. Bred from two of our best horses, she loves to jump and is always on the move. The Irish Sport Horse is a product of breeding a Thoroughbred and an Irish Draught together, and it's a great combination. Midnight shows in IMEHA, and she is an OF Breyer SM G3 WB 2010 WEG SR. 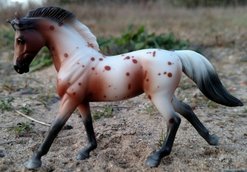 Twist N Shout (Sinister x Dianelle). 2005 bay semi-leopard Knabstrupper mare. Twist is our lone Knabstrupper mare, but she's a terrific horse. She's very athletic and loves to go riding. She shows in IMEHA, and she was bred by Heidi Green and Dawna Hill/Green Hill Farm. Twist is an OF Breyer SM G3 WB.