On this page you will find all of our WBs - from Hanoverians to our lone Westfalen mare. Most of the warmblood registries have very strict naming regulations - please follow these when naming your foals. Our warmbloods may be used to cross on our American Sport Horses/Ponies and Thoroughbreds. 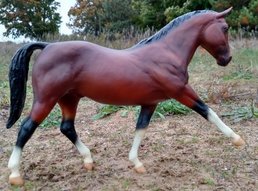 Adversary (Warnish x Amazona). 2003 bay Trakehner stallion. Adversary is a great horse - he's gentle, willing, and athletic. He makes a pretty picture with those stockings, too! He is showing in IMEHA and IPABRA. He was bred by Kay Meyers/Caballos del Mar. Adversary is an OF Breyer Traditional Hanoverian "Gifted." 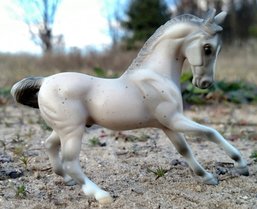 Airshrike Command (Aramadale x Versailles). 2002 flea-bitten grey Holsteiner stallion. Command is one of our foundation WB stallions, and a really nice horse. He's calm and easy to handle - even the kids can take care of him. He is now showing in IMEHA and IPABRA, and he was bred by Cory Hartung/Double Hart Ranch. Command is an OF Breyer SM G2 WB. 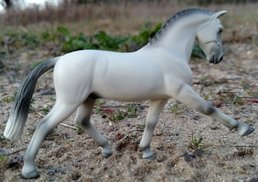 Arctic Wind (Artistik x Daccar). 2002 light grey Hanoverian stallion. Wind is a fun horse to be around - he loves to show off in the pasture, racing all over the place. But when the halter goes on, this boy is all business! He shows in IMEHA as of right now, and has done really well. Bred by Kay Myers/Caballos del Mar, Wind is an OF Breyer SM G4 Dressage Horse, 2010 SR for WEG (part of the SM set sold at WEG). 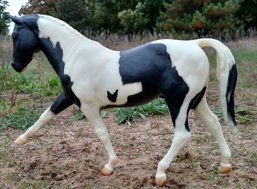 Defender (Diagon x Cassandra). 2012 black tobiano Oldenburg stallion. Defender is one of our younger WB stallions, but he has plenty of potential. He's spirited and fun to ride, and he currently shows in IMEHA. Bred by Cory Hartung/Double Hart Ranch, Defender is an OF Breyer Traditional Hanoverian "Art Deco." 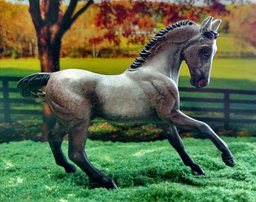 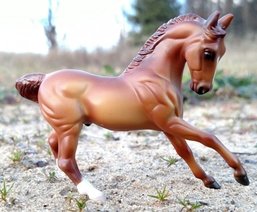 For Honor (For Love x Pagoda). 2002 chestnut Hanoverian stallion. Honor is a good, honest horse. He always tries his hardest, and he has lots of heart and power. He shows in IMEHA right now, and is doing very well. Bred by Kay Myers, Caballos del Mar, Honor is an OF Breyer SM G2 WB. 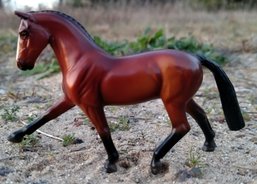 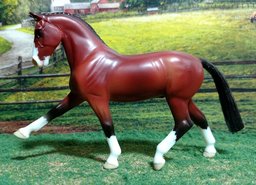 Victorious (Hypnotic x Violina). 1998 red bay Trakehner stallion. Victorious is one of our homebreds, and a really nice horse. He's sweet like his sire, and has lots of spirit and drive. He currently shows in IMEHA. Victorious is a CM etched Breyer SM G4 Dressage Horse [by Jennifer Tomey]. 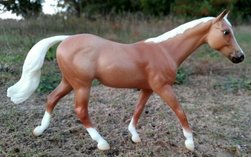 Dawn Patrol (Derringer BWS x Charisma Please BWS xx). 2008 palomino Westfalen mare. Dawn is our lone Westfalen in the herd, but what nice one she is. She's calm and quiet, and business-minded when you're in the saddle. She enjoys a quiet trek through the woods on the property just as much as the arena. She currently shows in IMEHA. Dawn was bred by Jamie Stine/Blackwatch Stables, and she is an OF Breyer Classics WB Mare. 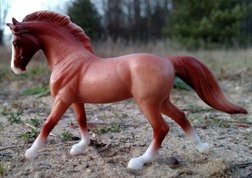 Hacienda (Aalen x Haiku). 2000 chestnut roan Trakehner mare. Hacienda is one of our foundation mares for our WB herd, and she's spunky and quick. She has plenty of charisma and athleticism, and she currently shows in IMEHA. She was bred by Kay Myers/Caballos del Mar, and she is an OF Breyer SM G3 WB. 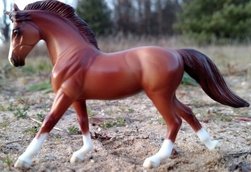 Javelin (Herbstnebel *R x Jagerin *R). 1989 chestnut Trakehner mare. This girl is one of our foundation WB mares, and she's getting on in years. But there's plenty of spunk in her, and she loves to go trail riding! She shows in IMEHA, and her breeding was arranged by Jennifer Lambert/Red Dragon Farms. She has one blue eye. Javelin is an OF Breyer SM G3 WB. 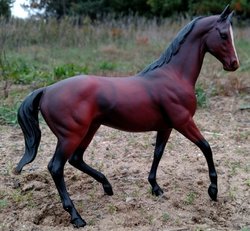 Jonquil (Adversary x Javelin). 2007 blood bay Trakehner mare. Jonquil is a homebred, and we couldn't be any happier with her. She's already an outstanding show horse in IMEHA, and she is now also showing in IPABRA. Spirited and always ready to go, we look forward to more from her! Jonquil is an OF Breyer Classics Kelso. 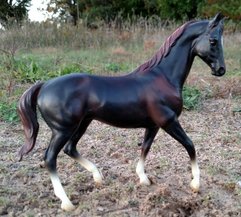 Violina (Londinium x Venka). 1993 liver chestnut Trakehner mare. Violina is another of our foundation mares, and a terrific show horse in IMEHA. She is also showing in IPABRA. Calm and quiet, with a nice big stride, she is a terrific horse. Bred by Jean Sorensen/Lake Hill Ranch, Violina is an OF Breyer Classics Kelso; "Jeremy" from the After School Herd. 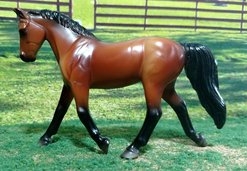 Wisteria (Fanatical x Wonderful). 1992 bay Oldenburg mare. Wisteria is one of our older horses, and one of our nicest. She is gentle and easy to handle, and loves people. Big in movement, she shows in IMEHA right now. Wisteria was bred by Cindi Nakagawa/Indigo Creek Stables. She is an OF Breyer SM G4 Driving Horse.