The Georgian Grande breed has its beginnings back in the 1970s, and the International Georgian Grande Horse Registry was founded in 1994. In 2010, a pony division was added. The Georgian Grande is a big, beautiful horse that results in the crossing of the American Saddlebred with an approved breed of draft horse. The breeds draft breeds acceptable are: American  Cream, Belgian, Clydesdale, Friesian, Gypsy Cob (Vanner), Percheron, Registered Drum Horses, and Shires. We don't currently have any Georgian Grande Ponies, but hope to remedy that! The ponies are a cross between the American Saddlebred, and one of these approved pony breeds: Dales, Fell, Friesian (small, pony-sized), Gypsy Pony, Haflinger, or Welsh Cob. We are excited to offer our Georgian Grande herd for your consideration. We breed for a horse that has the look of a draft cross combined with the elegance and smooth way of going of the American Saddlebred. They are spirited but gentle, and can be used in any riding discipline. They must have at least a two-word name to be registered.

Because we here at Trumpet Farm also love science fiction and fantasy, we name most of our Georgian Grandes after things in those communities, such as Doctor Who and Star Wars. We would love for you to follow in our tradition, but it is not required. 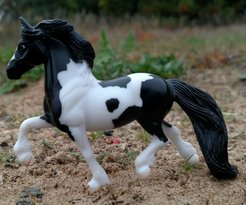 Cyber Man (Sensei x Jack N Gill’s Jordan). 2005 black tobiano Georgian Grande stallion [ASB/NASD]. Cyber Man is one our foundation Georgian Grandes, and what a looker he is! He has high leg action and plenty of presence, along with lots of chrome to stand out in the ring. He was named after the robotic aliens in the TV series Doctor Who. His dam is a North American Spotted Draft, which is an allowable cross as long as there are no Paint Horses up close in the pedigree. He shows in IMEHA, and we just love having him on the farm. He was bred by Kay Myers/Caballos del Mar, and he is an OF Breyer SM G3 Cob.

Fun Fact: His paternal great-grandsire is the outstanding model American Saddlebred stallion, Boom!, who is as close to model horse royalty as one can get. 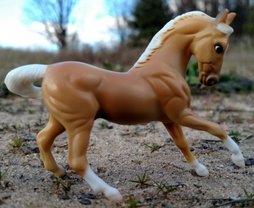 Doctor Gallifrey (Golden Sovereign x SLR Jubilee). 2007 dark palomino Georgian Grande stallion [ASB/Belgian]. Gallifrey is a great horse - he's calm, quiet, and very athletic. Anyone can ride or handle him. Gallifrey was named after the home planet of the title character in the TV series, Doctor Who. He currently shows in IMEHA and IPABRA. His breeding was a collaborative effort between us and Kay Myers/Caballos del Mar. Gallifrey is an OF Breyer SM G2 WB SR. 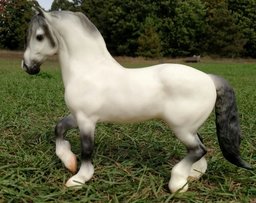 Jack Sparrow (TF’s Velvet Emperor x Winter Sultana). 2006 grey (black) Georgian Grande stallion [Shire/ASB]. Jack is one of our homebred horses, and he's a big happy fellow. He's a quick learner, but he is a bit of a handful to ride, just like his dam. He was named after our favorite movie pirate from the movie series, Pirates of the Caribbean. Jack is a half-brother to our NASD mare, Trumpet's Enchantress [through sire]. He currently shows in IMEHA and IPABRA. Jack is an OF Breyer Traditional Friesian, Christmas SR "Jack Frost." 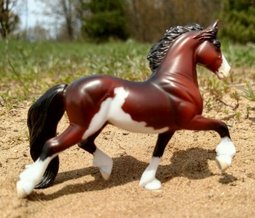 Sarlacc the Great (DHR’s Uptown King x Braccor Highland Lassie). 2001 bay splash overo Georgian Grande stallion [ASB/Clydesdale]. Sarlacc, our foundation Georgian Grande stallion, was named after the Sarlacc pit found in the movie, Return of the Jedi, from the movie series, Star Wars. He is a fun horse to ride and be around - he loves people. He currently shows in IMEHA. Sarlacc was bred by Cory Hartung/Double Hart Ranch, and he's a CM etched Breyer SM G3 Cob [by Jennifer Tomey]. 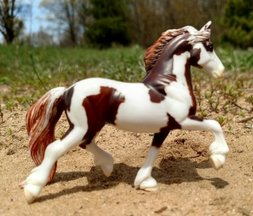 Han's Corellia (Dunelm Lestrade x El Dorado Gold Style). 2002 chestnut tobiano Georgian Grande mare [Clydesdale/ASB]. Corellia, named after Han Solo's home world in the Star Wars series of movies and books, is one of our foundation Georgian Grande mares. She's big and has a big stride to go along with her chrome. She loves people and loves to hang around the front of the pasture, where she can keep an eye on what's happening. Corellia currently shows in IMEHA, and she was bred by Kay Myers/Caballos del Mar. She is a CM etched Breyer SM G3 Cob [by Jennifer Tomey]. 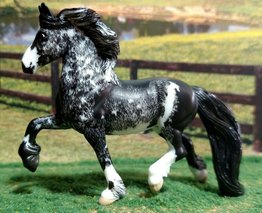 Mal's Firefly (The Prestige x Footprint Royal Princess). 2000 black sabino Georgian Grande mare [ASB/Clydesdale]. Firefly is an unusual looking mare, thanks to her sabino coat, and she was named for the Firefly TV show that featured Captain Malcolm Reynolds (one of actor Nathan Fillion's outstanding roles). She is a very nice horse and fun to ride. She currently shows in IMEHA, and she was bred by Kay Myers/Caballos del Mar. Firefly is a CM etched Breyer SM G3 Cob [by Jennifer Tomey]. 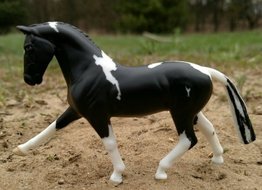 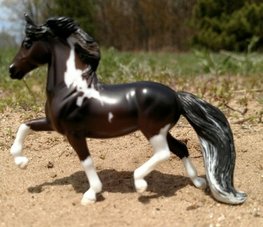 Princess Leia (DHR’s Ace in the Hole x Braccor Delilah Joy). 2003 black tobiano Georgian Grande mare [ASB/Clydesdale]. Named for the rebel princess of Star Wars fame, Leia is a really nice show horse with good leg action and athleticism. She's easy to work with and a hoot to ride, with lots of spirit. She currently shows in IMEHA, where she has done really well. Bred by Cory Hartung/Double Hart Ranch, she is a CM etched Breyer SM G3 Cob [by Jennifer Tomey]. 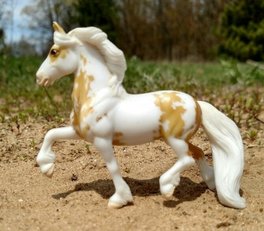 Queen Amidala (Sailors Alaska Glacier Gold *R x Bonnie of MVP *R). 2005 palomino tobiano/sabino Georgian Grande mare [ASB/Gypsy Cob]. Amidala, named for a character in the Star Wars franchise, is a very nice mare. She's calm and sweet, and loves being groomed. She also has unusual coloring, and that's another reason why we love her. Her breeding was arranged by us, and she's a CM etched Breyer SM G3 Cob [by Jennifer Tomey]. 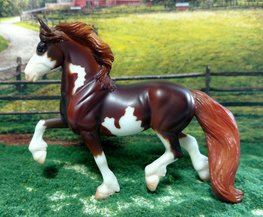 River Song (Beau Decision *R x Bannockburn Duchess). 2003 chestnut overo Georgian Grande mare [ASB/Clydesdale]. River was named for a character in the sci-fi western TV show Firefly, and she's a really cool mare. She currently shows in IMEHA. She has lots of flair and flash, and she loves to go, go, go! Her breeding was arranged by us, and she's an OF Breyer SM G3 Cob. 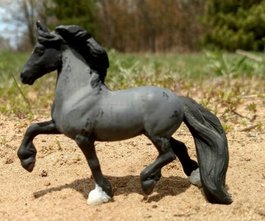 Wicket's Endor (Donegal Sultan *R x Gypsy Ballerina *R). 2005 black roan Georgian Grande mare [Clydesdale/ASB]. Endor, named after a planet in the Star Wars franchise, is a beautiful roan mare with lots of get-up-and-go, and she likes to strut her stuff in the pasture when she's loose, too. She currently shows in IMEHA, and her breeding was arranged by us. Endor is a CM Breyer SM G3 Cob [by Jennifer Tomey].