Welcome to our  Spanish non-gaited breeds page. Here you will find our Andalusians, our Lusitano stallion, and our American Aztecas. These stallions are included here as they are half-Andalusian. The horses on this page may be used for American Azteca breeding. The American Azteca is a cross between an Andalusian or  Lusitano and either a Paint or  Quarter Horse. 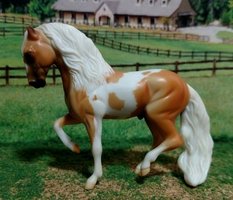 Aztecan Treasure (Carmelo DFC x Miss Mattel). 2010 palomino tobiano American Azteca stallion [Andalusian/Paint]. Treasure is a young stallion, and a lot of fun to work with. He stands out with his sunny pinto coat, and has plenty of poise from his Andalusian sire. He shows in IMEHA, and was bred by Kay Myers/Caballos del Mar. Treasure is a CM etched Breyer SM G2 Andalusian [by Jennifer Tomey]. 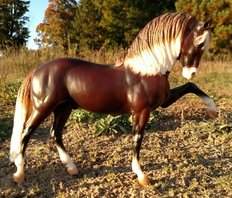 Captain Solo (Excalibur x Perla). 2004 liver chestnut Lusitano PSL stallion. Solo is our one lone Lusitano, and he's such a pretty boy. He has a great attitude, and he's a gentleman around everyone. He currently shows in IMEHA, and he was bred by Erin Logan/Red Wolf Ranch. Solo is an OF Breyer Traditional Legionaro III. 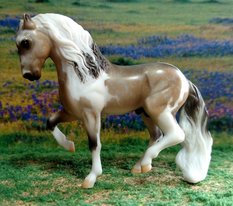 Pirate Coast (Valentino IV x Baltimora). 2004 rose grey (chestnut) tobiano American Azteca stallion [Andalusian/Paint]. Pirate is our foundation American Azteca, and we love his beautiful coloring and his fiery temperament. He fun to ride, but quite spirited, and not for beginning riders. He shows in IMEHA, and he was bred by Kay Myers/Caballos del Mar. Pirate is a CM etched Breyer SM G2 Andalusian [by Jennifer Tomey]. 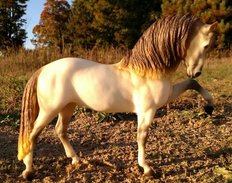 Serious Moonlight (Relampago Blanco x Castana). 2005 greying chestnut Andalusian PRE stallion. Moonlight is a really nice horse. He is our foundation Andalusian stallion, and a quiet horse. He spends a lot of time just hanging out in his pasture. Bred by Randa Garrett/Twin Springs Stables, he is an OF Breyer Traditional Legionario III.

Fun fact: I got this pretty fella at the Holiday Inn in Lexington, KY, during the 2010 BreyerFest. I had made an earlier arrangement with his owner to meet her there on Friday night and pick him up. When my sister and I arrived, as you know if you've ever been there on that magical Friday night, the place was PACKED! And someone had pulled the fire alarm, so the hotel had asked everyone to vacate. As people filed back into the convention center part, we just filed in right along with them, and didn't have to stand in line to get into that big room! We got lucky :-) 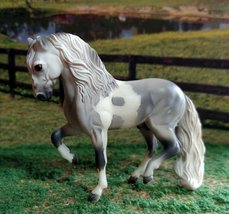 Silver Spell (Spell Caster x Silver Spur). 2014 grey tobiano American Azteca stallion. Silver is a homebred by our Andalusian stallion, Spell Caster and out of Silver Spur, one of our Paint mares. He's a striking horse, but he has a bit of a naughty streak and likes to nip. He shows in IMEHA, and he is a CM etched Breyer SM G2 Andalusian [by Jennifer Tomey]. 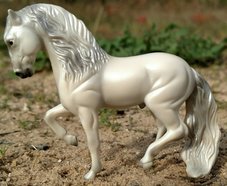 Spell Caster (Voltaro x Perla Marron). 2006 light grey Andalusian stallion. Caster is a nice horse, if a bit stand-offish. He likes his personal space. He is well-mannered, and a delight to ride. Bred by Randa Garrett/Twin Springs Stables, he shows in IMEHA, and is the sire of our American Azteca stallion, Silver Spell. He is an OF Breyer SM G2 Andalusian JCP SR 2009. 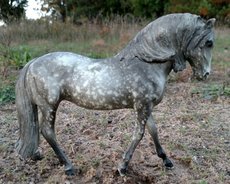 Enchanting Mystery (Fuego Palido x Andanza). 2004 dapple grey Andalusian mare. Mystery is our lone Andalusian mare, and what a sweetheart she is. She's a great show horse in IMEHA, and a simple pleasure to be around. She'll do anything for an apple! She was bred by Tracey Bartone/Shadow Wolf Ranch, and she's an OF Breyer Classic Andalusian mare.

Fun fact: I got this little girl at a flea market. She was sitting on a table along with a few other super scruffy models, and I picked her up and knew she had to come home with me. I named her Mystery because she has a ton of dapples, more than I've ever seen on any model like her, and I've always wondered if she was some sort of test model or SR.