We currently have a very small Shire herd - two stallions and one mare, but they are very nice horses. We hope to add more to this herd. 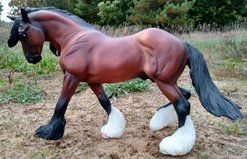 TF's Knight's Crusader (Wynter Gladiator x Arvyne Blue Baroness). 2002 bay Shire stallion. Crusader is a big, long-legged horse with a great attitude. He is a live show winner, and has had several NAN cards over the past few years. He currently shows in IMEHA and IPABRA. Bred by Cory Hartung/Double Hart Ranch, Crusader is an OF Breyer Traditional Othello Treasure Hunt "Fall." 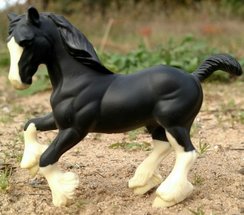 TF's Velvet Emperor (Heritage Blue Balou x Greyfaire Myrina). 2001 black Shire stallion. Emperor is a wonderful horse. He loves people, and he loves standing around to be fussed over or groomed. He currently shows in IMEHA and IPABRA. Emperor was bred by Kay Myers/Caballos del Mar. He is an OF Breyer Breyer SM G2 Draft. 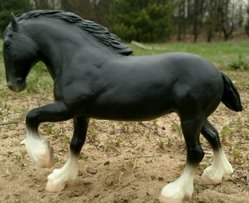 TSS The Baroness (TSS Tristan x TSS Lady Anne). 2000 black Shire mare. Baroness is currently our lone Shire mare, but what a mare she is! In her first show in IMEHA, she was a Division Reserve Champion, and she is a consistent top six placer in that show series. She is also now showing in IPABRA. Bred by Randa Garrett/Twin Springs Stables, Baroness is an OF Breyer Little Bits Draft.