Our American Sport Ponies are bred to be athletic, willing, and capable of doing whatever discipline you're interested in, including trail riding. Our Sport Ponies can be bred to our other ponies or horses to get exactly what you need. Most of our Sport Ponies (and Sport Horses) are named after super heroes and villains; we would appreciate it if you continued this trend, but it's not a requirement. 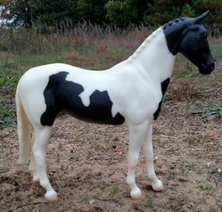 Booster Gold (Aberdare Dixie Gold x Ima Dun Colorin’). 2009 black tobiano American Sport Pony stallion [Welsh Sec. B/Paint]. Booster is named for a DC Comics super hero from the future, and this pretty fella is the future of our ASP breeding program. A homebred, he combines the grace of his Welsh sire with the chrome and athleticism of his dam. Booster currently shows in IMEHA, where he is doing very well. He is a half-brother to Rogue [through sire]. He is an OF Breyer Classics Jet Run. 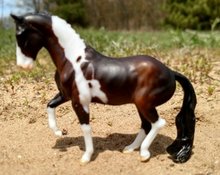 Hurricane (Senator’s Faerie Dragon x Cody’s Trickster). 2009 dark bay tobiano American Sport Pony stallion [Connemara/Paint]. Hurricane is a homebred, and he's a whirl of action, just like his namesake. He loves attention, and would rather be with you rather than in the pasture. He's currently showing in IMEHA, and he's a CM etched Breyer SM G5 Valegro [by Jennifer Tomey]. 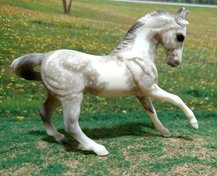 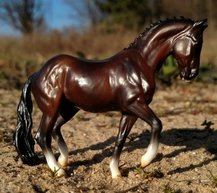 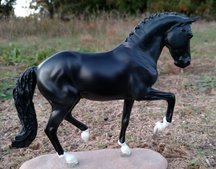 Trumpet's Guardian (Highlifes Bodyguard *R x Hilkens Gala *R). 2010 black German Riding Pony stallion. Guardian is one of our newer stallions, and he fits in very well with our American Sport Pony breeding program. He is the sire of our young stallion, Sentinel. Guardian has almost earned his first Champion badge in IMEHA, and he is also showing in IPABRA. His breeding was arranged by us, and he is an OF Breyer Totilas resin. 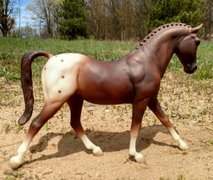 US Agent (Brecon’s Honorable Eclipse x Guns N Peaches). 2002 chestnut blanket American Sport Pony stallion [Welsh Sec. A/Appaloosa]. Agent is our other ASP herd foundation stallion, and he was named after a Marvel Comics super hero who fights alongside Captain America. He's well-mannered and intelligent, and athletic enough for anything you ask him to do. A homebred, he shows with IMEHA. Agent is an OF Breyer Classics Keen. 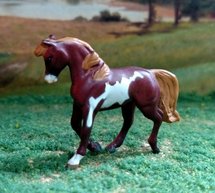 Captain's Country Girl (Captain’s Flashy Jet x Arks Loretta Lynn *R). 2010 chestnut overo American Sport Pony mare [Classic Shetland/Grade pony]. Country is one of our younger ASP mares. We really wanted an offspring of Kay Myer's outstanding Shetland Pony sire, and we're thrilled to death with Country! She's smart, a bit sassy, and ready to take on whatever you set her to. She currently shows in IMEHA. Her breeding was arranged by Kay Myers/Caballos del Mar. Country is an OF Breyer Mini Whinny Morgan. 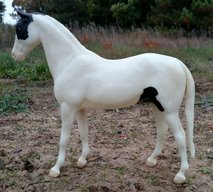 Darkstar (Iceman x Trumpet’s Night Star). 2004 black minimal tobiano American Sport Pony mare [ASP/Welsh Sec. B]. Another of our homebred Sport Ponies, she's named after a Marvel Comics heroine. Darkstar is calm and quiet, and she likes to be groomed and hang out with people. She's also great on the trails. She currently shows in IMEHA and IPABRA. Darkstar is a CM etched Breyer Classics Jet Run. 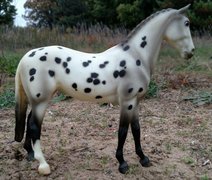 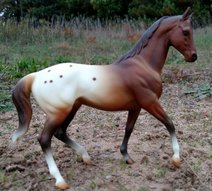 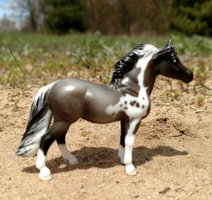 Jubilee (Glyndahl Master Charles x Incessant). 1995 black roan tobiano American Sport Pony mare [Welsh Sec. B/ASH]. Jubilee is one of our foundation mares for our ASP herd, and she's feisty, even at her age! She can be very sweet, and she loves to jump. She currently shows in IMEHA. Jubilee is named after the Marvel Comics X-Man character. She was bred by Cory Hartung/Double Hart Ranch, and she's a CM etched Breyer SM G3 Pony. 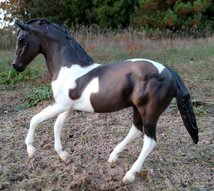 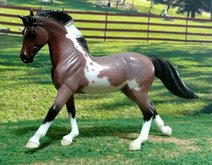 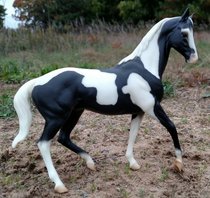 Rogue (Aberdare Dixie Gold x Jubilee). 2000 black tobiano American Sport Pony mare [Welsh Sec. B/ASP]. Named for one of our favorite Marvel Comics super heroines, Rogue is a half-sister to Booster Gold [through sire]. She's also one of our foundation mares, and a daughter of Jubilee (listed above). This mare is game for anything, including barrels or pole bending! A homebred, she shows in IMEHA and IPABRA. Rogue is an OF Breyer Classics Kelso, "Blackjack." 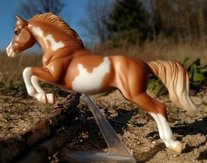 Shadowcat (Scorpio x Jesta Second). 1998 chestnut overo American Sport Pony mare [Connemara/ASP]. This girl loves to jump! She's a well-built, well-mannered mare, and she's one of our foundation ASP mares. Her name comes from the Marvel Comics X-Man (or woman, in this case), and she shows in IMEHA. Bred by Cory Hartung/Double Hart Ranch, Shadowcat is an OF Breyer SM G3 Jumper. 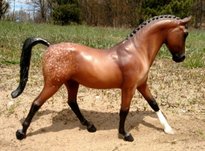 Smooth Criminal (Smooth Operator x Trumpet’s Night Star). 2010 dun snowflake American Sport Pony mare [Appaloosa Sport Horse/Welsh Sec. B]. Criminal is one of our younger mares, but that doesn't mean this little girl can't get things done! She's a very pretty mover, and she has just enough chrome to attract attention. A homebred, she's named in part after her sire, and in part after the Michael Jackson song. Criminal is an OF Breyer Classics Keen. 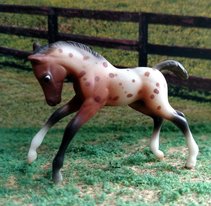 Spitfire (Erminetoes Star x Gretha). 2005 bay leopard American Sport Pony mare [British Spotted Pony/Hanoverian]. Spitfire may sound like she's a handful, but she's really quite a sweetie. She does like to get up and go, though, so hang on if you're riding her! She currently shows in IMEHA, and she was bred by Laurel Dedes/Persimmon Hill Ranch. Spitfire is an OF Breyer SM G2 Scrambling Foal.

Windsprite (Uzumaki x *Miyagi). 2007 chestnut tobiano Welara Sport Pony mare [WSP/Welara]. The only Welara Sport Pony on the farm, Windsprite is good-natured, friendly, and has a lively attitude. She loves to race around the pasture, and can often be found by herself or hanging around with Revanche. Windsprite currently shows in IMEHA, where she is a Division Reserve Champion, and was bred by Martha Baker/Dreamland Farm. She is an OF Breyer Classics Mesteno's Mother, Walmart SR "Standing Rain."