Our Rocky Mountain herd is small - just two stallion and two mares, but they are super nice horses. Built for whatever discipline you'd like, they are tough, smooth, and friendly. They may be used for crosses for Spotted Saddle Horses, or American Gaited Ponies. Fun tidbit about this breed: it's rumored that Roy Rogers' original Trigger was a Rocky Mountain Horse. 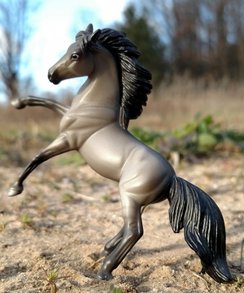 Comet Dun Gone (Alliances Gone N Dun It *R x BRR Halley’s Comet *R). 2014 silver grullo Rocky Mountain Horse stallion. Comet is young, but he shows very well in IMEHA. He is spirited and friendly, and a hoot to ride. We look forward to great things from this young stallion. His breeding was arranged by us, and he is an OF Breyer SM G3 Andalusian. 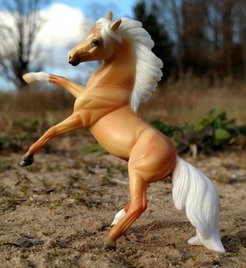 Golden Smoke (BRR Bandit’s Gunsmoke *R x Golden Amber *R). 2011 palomino Rocky Mountain Horse stallion. Smoke is a great horse - young and full of vigor, and friendly to boot. He shows in IMEHA and has done really well for himself and us. His breeding was arranged by us, and he is an OF Breyer SM G3 Andalusian. 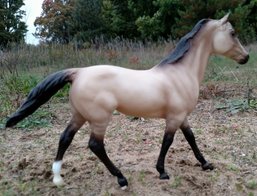 Spanish Mist (Spanish Sundown *R x Misty May Day *R). 2004 dunskin Rocky Mountain Horse mare. Mist is the oldest of our RMH herd, and as laid-back as they come. She loves a good trail ride more than anything else, and she's very friendly, as are all our RMHs. This friendliness is a hallmark of the breed. She shows in IMEHA, where she has done very well. We arranged her breeding, and she is an OF Breyer Classic Ruffian. 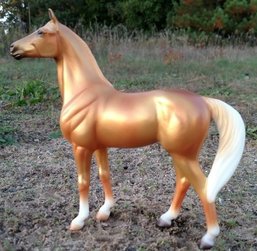 Topaz's Phantom (McGuires Ghost *R x Golden Topaz *R). 2005 palomino Rocky Mountain Horse mare. Topaz is a great horse, and she's fun to ride. She has plenty of spirit, and a sunny coat to go with that disposition. Friendly, she loves to hang out at the fence and watch the daily activity of the farm. She shows in IMEHA, where she has done really well. We arranged her breeding, and she is an OF Breyer Classic Standing TB.