Welcome to our little Fell Pony herd. We only offer one stallion and two mares at this time. Our stallion is a dark bay, which, while being a rarer color, is allowed by the breed standards. 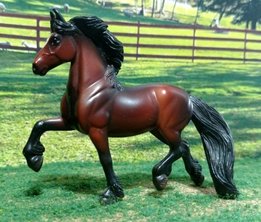 Coventry Fenwick Giant (Murthwaite Giant x Fenwick Plum Blossom). 2000 blood bay Fell Pony stallion. Giant is a great horse; our Fell foundation stallion, he loves people, and loves hanging around with them. Anyone can handle him, and he has great leg action. He currently shows in IMEHA. He was bred by Laurel Dedes/Persimmon Hill Ranch. Giant is an OF Breyer SM G3 Cob. 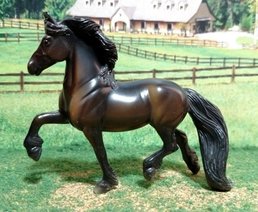 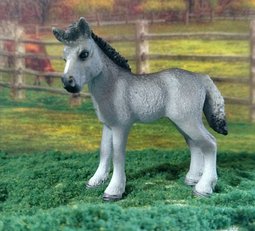 Trumpet's Lily (Littletree Highwayman *R x Lunesdale White Heather *R). 2009 grey Fell Pony mare (shown as foal). Lily is our newest addition to our little Fell herd, and she's already proving herself in the show ring with IMEHA. She's playful and spirited, and loves people. Her breeding was arranged by us, and she's an OF Schleich Fell Pony Foal.