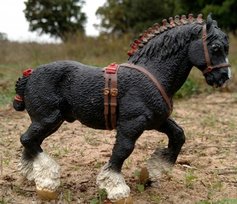 Bannockburn Black Scimitar (Lochlevin Black Sabre x Lochlevin Black Zephyr). 1999 black Clydesdale stallion. Scimitar is one of our foundation sires for our Clydesdale herd, and he's a super nice horse. He can have a bit of an attitude, but he's not nippy. He shows in IMEHA, where he is a Division Grand Champion. Bred by Cindi Nakagawa/Indigo Creek Stables, Scimitar is an OF Safari Farm Horse Clydesdale. 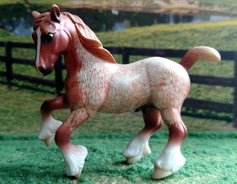 Braccor News Flash (Bannockburn Master Flash x Braccor Harleen Blair). 2005 chestnut roan sabino Clydesdale stallion. Flash is a really nice horse; he's easy to work with, and he loves people. He can be a handful to catch, though - unless you have carrots. He currently shows in IMEHA. Flash was bred by Cory Hartung/Double Hart Ranch, and is a CM etched Breyer SM G2 Clydesdale [by Jennifer Tomey]. 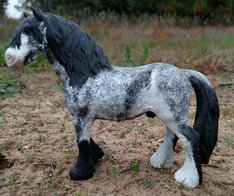 Dunelm Blue Warrior (Braccor Daimen x Gailleann McVane). 2006 black roan sabino Clydesdale stallion. Warrior is the kind of horse anyone can work with. He has a great attitude and he loves people and hanging around the corral. He currently shows in IMEHA and IPABRA. Bred by Cory Hartung/Double Hart Ranch, Warrior is a CM Schleich Draft Horse [by Jennifer Tomey]. 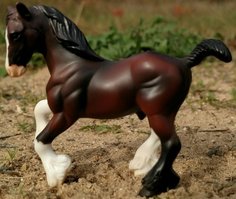 Dunelm Quest (Dunelm Kilmadan x Greendyke’s Elizabeth). 1998 dark bay Clydesdale stallion. Quest is one of our foundation sires for our Clydesdale program as well. A gentleman, he has an easy-going temperament, and is fun to work with. We've actually had him on the trails here, too, and he loves it! He's calm enough that kids can even handle him. Quest currently shows in IMEHA and IPABRA. Bred by Kay Myers/Caballos del Mar, Quest is an OF Breyer SM G2 Clydesdale. 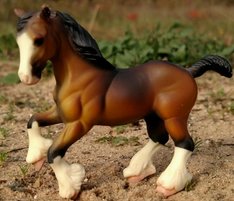 TF's Pay the Piper (TS Dark Remark x TS Harvest Dream). 2003 bay Clydesdale stallion. Piper is a sweet horse. He loves people and he likes to be around people more than other horses. He was our first  Clydesdale, and we think the world of him! He currently shows in IMEHA. Bred by Randa Garrett/Twin Springs Stables, Piper is an OF Breyer SM G2 Clydesdale. 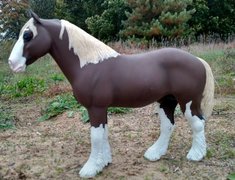 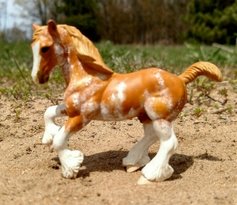 Trumpet's Royal Headlines (Braccor News Flash x Bannockburn Duchess). 2009 chestnut sabino Clydesdale stallion. Royal is another one of homebred stallions, and he's always eager to do new things and be with people. He currently shows in IMEHA. Royal is a CM Breyer SM G2 Clydesdale [by Jennifer Tomey]. 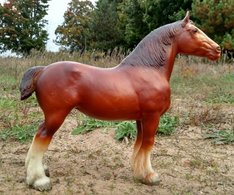 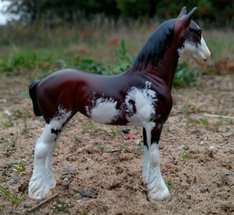 TF's Bonny Lass (Dunelm Nevis x Weatherhill’s Diana). 2006 bay sabino Clydesdale mare. Bonny is one of our favorite horses here on the farm. She's usually up near the barns, even when out in the pasture, because she likes people so much. She's friendly and easy to work around. Bonny currently shows in IMEHA and IPABRA. She was the 2013 MEPSA overall Draft/Pony Grand Champion. She was bred by Kay Myers/Caballos del Mar, and she's a CM Peter Stone Chips Drafter [by Mother Wolf Studios]. 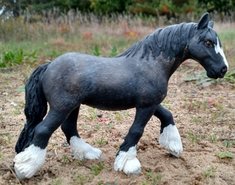 Trumpet's Black Empress (Bannockburn Black Scimitar x Bannockburn Duchess). 2004 sunburned black Clydesdale mare. Empress is one of our homebreds, and a very nice mare. She's got her dam's quiet nature and her sire's black coat. She can show a little attitude like her sire, sometimes, but she's gentle. Empress currently shows in IMEHA and IPABRA. She is a CM Schleich Drafter [by Jennifer Tomey].