On this page you will find our Paso Finos and our Walkaloosas. We don't have too many of either, but what we have are very nice. Both our Pasos and the Walkaloosas may be used for American Gaited Pony crosses. 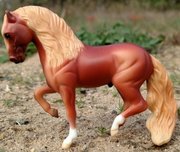 Comandante del Mar (Admirador del Mar x Bossa Nova PhD). 2002 chestnut Paso Fino stallion. Comandante is a really nice stallion. He's calm, easy to work with, but there's plenty of brio under the saddle. He loves to perform. Comandante shows in IMEHA, and he was bred by Kay Myers/Caballos del Mar. He is an OF Breyer SM G2 Andalusian. 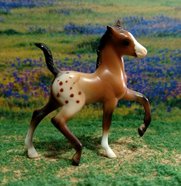 Rock the Cazbah (Sky Note x Gundam’s Love). 2008 bay blanket Walkaloosa stallion (ASB/ASB & Appaloosa) [shown as foal]. Cazbah is a homebred, out of our bay blanket Walkaloosa mare and by one of our top ASB stallions. He's got a lot of flash and chrome, and he's very playful. He shows in IMEHA, and is an OF Breyer SM G2 Trotting Foal.

Zapada de Color (Zapada de Estaban *R x Color de Miracle). 2015 bay tobiano Paso Fino stallion [shown as foal]. Zapada is a very young stallion, and he's out of our bay splash/tobiano Paso Fino mare and by an outside stallion. He shows in IMEHA, and his breeding was arranged by Jennifer Tomey/Blackfoot Stables. He is a CM etched Breyer SM G1 Lying Foal.

Color de Miracle (Calif. de Color *R x Milicirin’s Miracle *R). 2010 bay splash/tobiano Paso Fino mare. Color is a nice mare with excellent gaits. She can be a handful to work with, though. Her breeding was arranged by Jennifer Tomey/Blackfoot Stables, and she shows in IMEHA. We will be standing her colt, Zapada, at stud here on the farm when he comes of age. Color is a CM etched Breyer SM G1 Arab Mare [by Jennifer Tomey]. 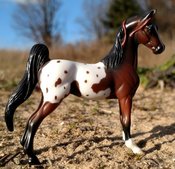 Gundam's Love (WPB Gundam Wing x Love Remembers). 2002 bay blanket Walkaloosa mare [ASB/Appaloosa x ASB]. Love is a really nice mare. She has plenty of sparkly chrome, but she also has terrific gaits and is a joy to ride. Her son, Rock the Cazbah, is also on our list. Bred by Randa Garrett/Twin Springs Stables, she currently shows in IMEHA. Love is an OF Breyer SM G2 ASB.

This How U Rack (BH Rack Em Up x Walk This Way). 1990 black blanket Walkaloosa mare [Walkaloosa/Walkaloosa]. Racker is a super nice horse. She has awesome gaits, and she just floats when you ride her! She's a favorite here on the farm for trail riding. Bred by Cory Hartung/Double Hart Ranch, Racker shows in IMEHA. She is an OF Breyer Mini Whinny ASB.